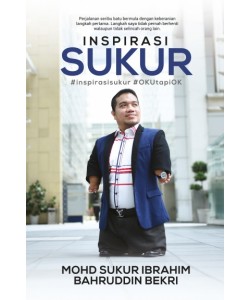 [Picture Source]
May reading was on Inspirasi Sukur, an anecdote of a businessman named Mr Sukur. He is physically challenged as seen in the picture above but that does not tear his spirit down in becoming a successful businessman in the textile industry. Specialising in carpet installation, Mr Sukur runs his business with his dear wife, Pn Wani whom he met during their degree years in UKM.
I could really get into his story because I too, wrote an anecdote about KHAIRUL NIZAM… 3 JARI DARIPADA TUHAN. So they went through a similar childhood experience in terms of being bullied and mocked. Mr Sukur is so much used to kids looking at him with a look and he’s fine with that. But what hurt him was when once a mother said to his child, “That man was very bad during when he was little, that’s why he has no arms and legs now. So you better be good”
.
When he was much younger, Mr Sukur went to sekolah OKU before he went to the public primary school. At the sekolah OKU there, he learned about basic living skills and began to develop independence in managing himself. Not just that, he was also active in acting, poem recitation and quite a number of other stage performances. This dude got style eyh!
As he entered boarding school in his teenage years, he developed even more skills and independence and he also learned that we can’t run away from asking for help. We all need help and we musn’t be ashamed to ask for it. Realising his uniqueness, he knew he had to do it. The struggle was even more in tertiary education as he went to UKM for degree. College residence was far from his faculty, students flocked into the bus and pushed him away, didn’t give him seats and pretended that they didn’t see him, being pushed forward if the bus had emergency brake because he didn’t have anything to grab on, are all part of his struggles that prepared him in the business world.
Business wasn’t that easy for him too. He tried a few businesses but they all went awry. With pressure from his parents to get a job when that wasn’t what he wanted, he struggled to make his carpet installation business happen. After a few years of hard work, Mr Sukur and Pn Wani made it to where they are now. Apart from business, Mr Sukur is also a celebrity as he frequently appears on the media. He’s also active in giving speeches and motivation talks because apart from having comfortable and quality life, Mr Sukur loves to get into the hearts of the people out there, especially those with special needs, to remind them that hey, we got real big opportunities in life to grab!
I wish Mr Sukur and Pn Wani success and happiness in both worlds. Thank you for the enlightenment about life from your perspective. A very recommended book to read guys. And oh, it’s only 240 pages with light reading and simple language.