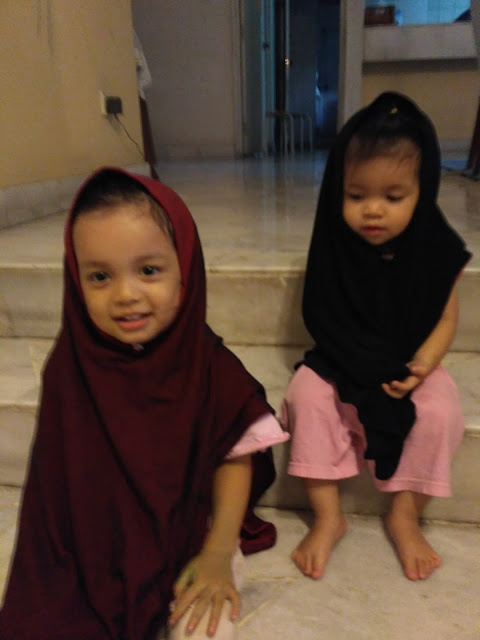 This happened just now, as I was performing isya’ prayer.

Alhamdulillah Nusaybah is able to go to the washroom to do her business. I’m so so glad that we have reached this stage (but accidents still happen at times though especially when she’s too occupied with playing).
So while I was praying, she quickly ran to the washroom and peed.  She called me a few times, “Ibu, kencing! Ibu kencing!”
For God’s sake I was on my third rakaat and boyyyy was I worried if she’d run and lean on me half naked without being cleansed. Worse,  if her pee drips on the floor!  Musnahlah solat, lantai and telekung aku.
On my final tahiyat, I prayed to God, apart from reciting the tahiyat akhir verses, that He would hold my daughter’s heart and keep her in the washroom until I finish praying.  There goes my concentration.

Alhamdulillah He granted my wish.

My girl patiently waited for my response to attend to her needs.  So I praised her for being able to wait for me and for doing her business in the designated tool.

So moral of the story:
1. If possible empty your kids’ bladder or at least get them pee just before you pray so you (hopefully) won’t end up like me.

2. Have faith in Allah.  Strong faith that Allah holds our hearts in His willing.  If He says naahh your gal ain’t gonna cause trouble, then she won’t. 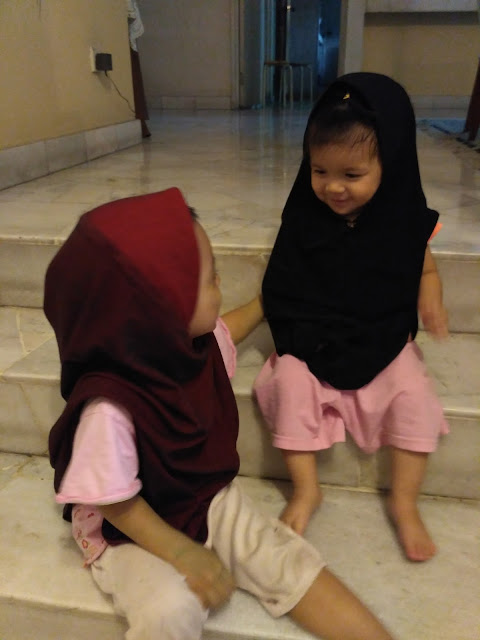 The Pah Bedah them

P/s I have finished my February reading and it’s on PARENTING!
Saya Taknak Marah Anak by Maznah Ibrahim.  I’ll blog about it soon insha Allah.

2 thoughts on “Can’t a mother pray in peace?”