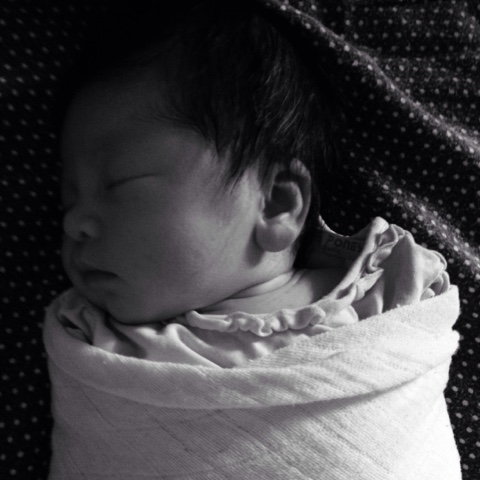 Hang on a minute, I? Gave birth?
Yes Zayana, you went through the hard work of carrying her for 40 weeks and that crucial 5 total hours of labour.
I am still marveled for the fact that a baby came out from my tummy although this is for the second time. And I reckon that happens to all mothers at every post natal eyh?
Alhamdulillah, I must say that labour and chlldbirth were a lot easier this time around, because Nuwayrah is only 20 months younger than Nusaybah. A few doctors have convinced me that cervix dilation is usually faster in cases like mine. It means I don’t have to wait for one hour to be 1 cm dilated. And yes they were absolutely right!
First contraction at ~10.45pm (3rd September) and followed by the subsequents at 5 minutes apart,
Left home at 12am and entered labour room at around 1am,
Went through the struggles for around 2 hours (only, masha Allah!) and baby came  out at 3am through nornal delivery.
Well, okay I admit within that two excrutiating hours, I did feel sorry for myself, envied all others who must have been in deep sleep enjoying their REM, and I told myself “let’s quickly get this over with. I wanna catch some sleep!”.
I planned beforehand with Mr.Husband to keep moving while going through the contractions and waiting to be fully dilated. Didn’t want to repeat my mistake while deliering Nusaybah that I lied down in bed on my back. Alhamdulillah we managed to keep moving until I couldn’t bear the pain anymore, so I lay on my side (as long as not my back, these positions help to release the pain). And I even asked for painkiller! Haha. But the nurses gave me gas instead because I was already 7-8cm dilated (and I was like, hah? Tadi baru 5cm. Yeay kejap lagi boleh push! Weee). Unfortunately, the gas was just plain annoying because it didn’t help a thing at this stage.
Long story short, as I felt the baby’s head reaching its way out, I knew that was the time to push. “Nak keluar dah ni, nak keluar dah. Panggil nurse“.
“Push slow, slow Puan! Taknak koyakkan? Push slow slow“.
“Okay kepala baby dah keluar. Biar dia pusing sendiri” I literally felt the baby’s head turned upward. Masha Allah, this was amazing. I don’t remember being in pain, But I was stunned.
And at stage 3 of labour, I requested to have a look at the placenta (Again another thing that I missed during Nusaybah’s), so the doctor had a one-to-one anatomy lecture with me. Hehe. “Ni placenta, ha sebelah sini melekat dekat rahim. Yang ni kantung, baby duduk dalam ni. Yang ni tali pusat”.
Alhamdulillah although things were still painful after that, the nurses injected some sort of drugs untuk kecutkan rahim, I was glad it’s over.
At 13th day today, I am still recovering. I am still getting the hang of being a mother of three. I am still trying to figure out the SOPs of almost everything; chores. But that’s okay, we’ll do things one at a time. Like the Chinese say, man man 🙂